But for a PoE power-sender, its entry-level Multi-Gig grade makes sense. Presently, even the fastest PoE devices, such as Wi-Fi 6 or 6E access pointsonly have 2.5Gbps or slower ports.

But the new switch can also host non-PoE clients, and in this case, you’d wish it had faster ports. Still, 2.5Gbps is plenty speedy, and for its purpose, the TRENDnet TPE-TG350 proved to be a little switch that could, in my trial.

But if you don’t care about Power over Ethernet, I’d recommend the TEG-S750 instead or the Zyxel MG-108 instead. Want a non-compromising PoE experience? Check out the Zyxel XS1930-12HP!

The TRENDnet TPE-TG350 is super-compact for a Multi-Gig switch and shares the same design as most switches.

It’s a rectangular box with all its ports on the front end. On the sides, there are ventilation openings. And on the underside, you’ll find the holes for wall mounting. And that is it.

The device is mostly hollow – it has a thin circuit board on the inside, making it quite light. And it doesn’t have an internal fan, which is always a good thing.

That said, physically, you can think of the TRENDnet TPE-TG350 as a mini version of the TEG-S750. As switches, though, they are quite different.

The two are both 5-port unmanaged switches. As a result, they are plug-n-play and can host up to four wired devices to an existing network – one of the ports works as the uplink.

The biggest difference between the two is that the TPE-TG350 has the entry-level of Multi-Gig, 2.5Gbps and the TG-S750 supports the top-tier 10Gbps. On top of that, four of the former are PoE + ports.

Like all unmanaged switches, the TPE-TG350 works as soon as you plug it in. There’s no software or web interface to worry about.

The way it works, you use its only non-PoE port (# 5) to connect to an existing network, preferably a route, or switch with another Multi-Gig port. After that, the other four ports are ready to power four PoE devices.

It’s worth noting that the switch doesn’t support PoE ++ (802.3bt), so it won’t be able to fully power devices that require high power input, such as the Netgear WAX630E access point.

On top of that, it has a total PoE power budget of 55W. As a result, it can only handle two full PoE + devices simultaneously. But you use the switch to host four low-power PoE devices – it supports all PoE devices of the PoE + and older standards.

It’s also worth noting that the TPE-TG350 can host non-PoE devices, just like any regular non-PoE switch.

For this review, I used the TPE-TG350 intensively for over a week as the power sender for two PoE + access points and ran into no issues.

The switch was silent but did get a bit warm. It was warmer than the slightly larger TEG-S750. So, it’s recommended that you use it in an open and cool environment.

As for throughput, it delivered exactly what you’d expect from a 2.5Gbps switch, as shown in the chart below.

Overall, other than the potential issue with overheating, the TRENDnet TPE-TG350 proved to be an excellent performer in my testing. 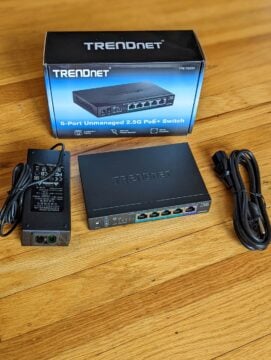 The TRENDnet TPE-TG350 5-Port Unmanaged 2.5Gbps PoE + switch is a relatively easy recommendation for moving past Gigigabit in the PoE world.

It is the perfect add-on hardware for wired home or office that needs to add a few Multi-Gig PoE access points to expand the Wi-Fi coverage.