Russia’s State Hermitage museum has announced that it will not hold exhibitions in any Western countries for at least a year following the return of its exhibits that had been on loan to museums in the EU.

It also announced that, as of June 21, all of its exhibits have been returned from shows in Europe after it lent pieces to exhibitions in Amsterdam, Hamburg, Brussels, London, Milan, Rome, and Paris.

The Hermitage noted that, since the escalation of geopolitical tensions, many European visitors had begun showing a particular interest in the museum’s works. Audiences in Italy, according to the museum, greatly appreciated Russia’s decision not to immediately recall its works, allowing the exhibition to carry on as planned, unlike “How Western partners on some projects did in Russia.” 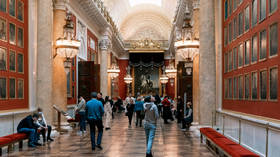 While nearly 700 of the Hermitage’s exhibits have now made their way back home, the process did not go smoothly. In March, Finnish customs decided to seize a number of valuable pieces worth $ 46 million on their way to Russia, arguing that they were subject to EU sanctions.

After Russian authorities warned that this was “Legal chaos” and demanded the return of its cultural property, Finland eventually decided to give the artworks back, insisting that the mishap had occurred due to the hectic pace at which sanctions were being introduced.