This article is a product of research and knowledge gathered from google and youtube.  Starting the business requires much more than all the resources in this article.

Grasscutter farming is gaining popularity in Africa for good reasons.

Greater Cane Rat popularly known as Grasscutter belongs to the rodent family and is very closely related to the porcupine, almost look alike except that porcupine is bigger. The spiny fur on the back and rounded nose distinguish Grasscutter from true rats. It reaches a length of about 720 mm when fully matured.Although the market potential basically depends on the spread of your farm, Grasscutter farming can make you at least N3million per year if nothing goes wrong.

This article is a product of research and knowledge gathered from google and youtube.  Starting the business requires much more than all the resources in this article.

Who consumes grasscutter meat and is it highly demanded for.

Of course, once you have a grasscutter farm with your animals doing fine and ready for consumption, how are you sure sales will come and who do you supply to.?

Although the meat is extremely suitable for commercial rearing. Food sellers, restaurants and fast foods dealing with bush meats are your targets. Apart from beef, people crave for assaulted bush meats and most restaurants are usually careful not to sell infected animals to their consumers After reading this article, you need between 6 – 12 months to make at least one million naira in this business. If not, then there is something you are still doing wrong. So, let’s get down to business and see how Grasscutter farming works

Grasscutter farming is highly profitable, more profitable than you imagined.Lets do the maths, A market-ready Grasscutter is sold between N4,000 to N5,500. Five hundred Grasscutters in a year could earn you between N2 Million to N2.75 Million.

One of the advantages of venturing into this branch of agriculture is the fast reproduction of grasscutters. The animal reproduces very quickly and in good numbers. A fully grown female Grasscutter after gestation, carries the pregnancy for 140 – 150 days and deliver about twice a year. Each pregnancy produces an average of four to seven young ones. Sometimes up to ten, that means one female Grasscutter could produce 8 – 20 other Grasscutters in a year

It grows big and very fast too(another advantage). Grasscutter is one of the biggest rodents in Africa. A fully mature female or male that is ready for market weighs between 3.5kg for the female and 4.5kg for the male. While measuring 45cm to 60cm in body length. The standing height is between 25 to 30cm. The body size of a fully grown male is about the size of a nine inches block.

A good number of Grasscutter is consumed yearly but most of them still come from the wild through hunters who go into the bush to hunt for them but usually not easy to catch, making the animal meat very scarce in the market.

A little more knowledge about a grasscutter Farm.

Here are important sections to note In Grasscutter Farming

Colony – Grasscutter lives in colonies, two mature male will not normally live together. Therefore, it is recommended to start with a male and a few females together. A colony should consist of one male and three to four females. Your capacity determines how many colonies you want to start with. A small farmer may start with one or two colonies, with the arrangement of one male and 3 females in each colony for faster mating.

Breeding – Grasscutter is kept 100% for the meat, it has to grow well and healthy in other to be profitable. To achieve this, a new farmer must lay emphasis on the choice of breeding stock. Each colony must have a very healthy male. While selecting the male, pay attention to the well being and weight gain in the male animals.

In any case, both the male and female stock you are selecting for breeding purpose must be healthy. While a healthy, strong, agile male animal should be selected for breeding programs, if the female is not genetically healthy too, it will also affect the breeding stocks. To ensure that you achieve the best possible result, both has to be healthy.

Grasscutter Pen – Grasscutters don’t like sleeping where they eat! If you are providing them house you must put this factor into consideration – either cage or house, you must provide steeping place and dining and playing place.

They can be breed either in a properly build cages or in a house specially designed for them. Grasscutter is sensitive to good habitat, for a colony (1 male and 3 females) the dimension of the cage should be 180cm in length, 60cm in width and 45cm in height. Build your cage that way, separate for each colony.

If you are using a fenced pen or house, make sure you section it such that the place they eat must be separate from where they sleep. Also, the production building must be designed to protect the animals from excess temperature and humidity.

The biggest enemies for Grasscutter are Snakes and Soldier Ants. Make sure their house is well protected from these harmful reptiles and you must also be wary of human thieves(You dont want to wake up one day and all your animals have been carted away for slave trade in Iya Alimo fast food. To protect them from the invasion of soldier ants, you may pour black engine oil around their houses, especially at night during raining season mostly.

NOTE: Floor finishing should not be in cement

The floor should be overlaid with dry soft grasses to protect their feet from being hurt and to provide them soft cushy play ground condition.

Now, this is the easier part, you don’t need to spend a dime feeding them, just enter the bush and look for the grasses mentioned below. Grasscutters are herbivorous animals meaning their source of food is basically from the bush, that’s why they are more comfortable in the bush where their foods could easily be found. Their major food is Elephant or Napier grass. They also love Sugar cane and most farmers use sugar cane mainly for their feeding, Guinea grass, Gamba grass, Congo grass. 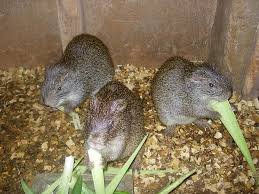 According to experienced farmers, Hygiene and good feeding are the most important factors for successful, profitably Grasscutter farming. You can also fatten the male with broiler’s finisher or broiler starter’s feed to help attain market weight within a short period of time.

More food for your grasscutters

The animal also like Gliricidia sepium, herbaceous legumes like Stylo (Stylosanthes gracilis) and Pueraria phaseoloides. The root and pitch of oil and coconut palms, bark of the anacardium and fruits such as half ripen pawpaw, plantain, pineapple, mango etc are their delight. Food crops such as groundnut, rice, maize, grain legume, tubers like cassava, sweet potato etc also make part of their food, stressed the grasscutter farmer.

Some farmers also stated that grasscutter feed on palm wine and that is why they destroy oil palm plantation.(They can be very uneasy when they are hungry, they can invade a whole farmland).They take their water mostly from the field and go to the river during the dry season only. But when domesticated, you can give them water by adding some attractant to it. it should be noted does not dig a hole and cannot climb a tree either, he further stressed.

Environment – The hate winter. Cold can kill them

Grasscutters don’t like cold environment. The rooms or cages where you keep them must neither be too cold nor too hot. Environment that is suitable for human is considered suitable for Grasscutters.

Weaning time – With good, adequate feeding, the grasscutter kids can be weaned between four to eight weeks. But as a family, they can be with the mother for four months. The kids can be separated from the mother between five to seven months and place with a male to mate with them.

The weaned animals can be mated at the age of between seven to eight months from birth. Indefinite mating is expected to have taken place when the weaned male Grasscutter is seven months old and the female is eight months. The indefinite mating period is 140days. But if after 160 days of separation from the male, there is still no sign of pregnancy , then it should be taken back to the male for proper mating.

Usually there should also be an extra male that can serve the same purpose.

The money part – How do you market our grasscutter

That depends on your own personal research , depending on where you live, you can begin to approach any food consumption service like restaurants , fastfoods and local sellers. The market like I stated earlier is very big. Grasscutter meat or Bush meat is probably the most desirable animal meet in the market. Everyone loves it and it sells very fast. Big restaurants uses it to prepare high priced delicacies. Full meat of a mature Grasscutter goes for N4,500 in the market(Do more research pls.) and the market women who trade on it are always in demand of it.

Most people in the city couldn’t buy the meat because it’s very scarce, so no amount of Grasscutter you produced that can’t be sold within days. It will take combined efforts of thousands of farmers to fill the need for bush meat in the market in Africa right now.

Grasscutter is a fast reproducing animal and starts mating with 7 months after birth. It gives birth twice yearly and produce 4-7 at a time. That means, if you have 100 females that gives birth twice in a year, you would be having 900 to 1,500 in your farm within just a year! Such number will bring you nothing less than N5 Million when they are matured for marketing.