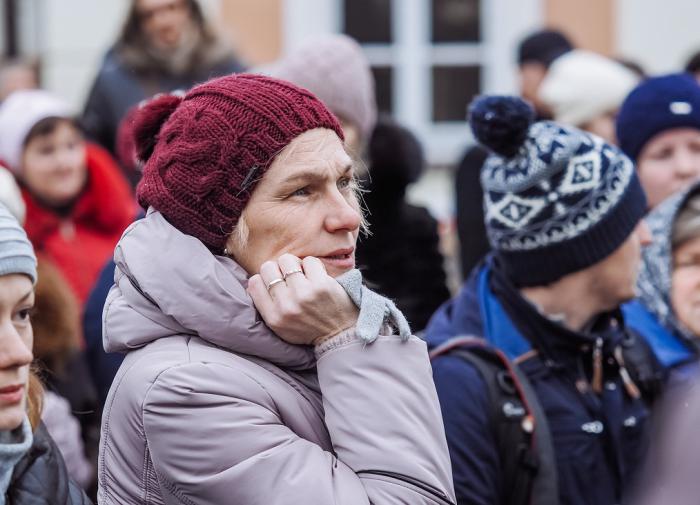 Folk-rap group Kalush Orchestra performed an impressive rendition of their song Stefania in the grand final of Eurovision.

The Ukrainian act is the favorite to win currently, having been frontrunners since Russia’s invasion – which prompted organizers to ban the country from competing.

The group was dressed in elaborate outfits, including long multi-colored fringed ensembles, a pink bucket hat and others in traditional patterns.

They are one of 25 acts vying for the top prize following the week-long contest in Turin, Italy.

Their performance, which combined rap and Ukrainian folklore, went down well with an audience of 7,000 in the Pala Olimpico, who cheered the group on with many waving Ukrainian flags.

At the end of the performance, which included break-dancing, the group thanked everyone for supporting Ukraine.

Graham Norton, who is once again anchoring the contest on BBC One, said: “We weren’t sure they were going to make it but they have made it.

“Their commentator did not make it, he is commentating from a bomb shelter.”

Their song, Stefania, is an ode to mothers and the trials they face raising families, and the band’s live performance featured synchronized dance moves, breakdance and flutes.

The final opened with an energetic performance featuring strobe lighting and projections of the sculpture of David by Michelangelo from Czech Republic’s We Are Domi singing Lights Off.

Finland’s rock group The Rasmus kicked off the first few performances with a powerful version of Jezebel, ripping their shirts off mid-show.

Marius Bear from Switzerland delivered a raw rendition of his track Boys Do Cry backdropped with simple lighting while France’s Alvan and Ahez had fire on stage to perform their track Fulenn.

Enjoy this absolute masterclass in #Eurovision choreography from Spain and the incredible Chanel. It’s a hypnotic booty! 🇪🇸💃 # ESC2022 pic.twitter.com/wuwQlQIoNO

Norway’s Subwoolfer dressed in yellow wolf costumes while performing a synchronized dance number and singing Give That Wolf A Banana.

Armenia’s representative, Rosa Linn, gave an emotional performance with her song Snap on a stage with a bed, lamp and chair all seemingly wrapped in white toilet roll.

Spain’s entrant Chanel gave a jazzy performance to SloMo while the entire crowd sang along with Italy’s Mahmood and Blanco who sang Brividi, which featured a powerful rap, behind a back drop of twinkly lights.

Eurovision entrant Sam Ryder will take to the stage, 22nd in the running order, in a bid to improve the UK’s standing during the grand final tonight.

Ukrainian folk-rap and Swedish balladeers: Who to …

The 32-year-old TikTok star will perform his uplifting pop song Space Man, which he co-wrote with Grammy-winning songwriter Amy Wadge, who has previously worked with Ed Sheeran and Max Wolfgang.

This year’s final features the 20 successful nations from the week’s two semi-finals, as well as the so-called big five of the UK, France, Germany, Italy and Spain. Ireland was eliminated at the semi-final stage.